Resources – The Tools, Gear & Rigs Used in Our Projects – Recommended

This page contains all the various resources we used to create our projects/ guides. We’ll keep you updated often as we progress further with our projects.

The links to each product/ tool/ part are listed at the bottom of each category & text.

This list will contain all the gear we recommend/use for all of our projects. It is irrefutable that, to complete a project, it is necessary to prepare all the tools and products.

By doing all the work all these years, I learned how to use lots of tools and products, put them through stress tests, analyse their potential.

On a negative side, in a surveillance business (as an employee), if you don’t adapt to any circumstance that may appear every day, it will be a struggle to do the job correctly. Naturally, everyone struggles with work at first since no one was born with infinite knowledge.

Same goes for electronics; there is a constant need to adapt, to reinforce the correct blueprints to create the perfect circuit board, the ideal software, precise tests. Everything we recommend on our blog is what we would do, what we did, what tools we used.

There is a product that I recommend to everyone, and I believe we all must have something like this. It’s called UPS (uninterruptible power source). If you want to check it on Amazon, read further. It’s necessary for almost any office that has precious data stored.

UPS has a separate power source that, becomes important after a power outage. That is to exclude power spikes, but we talk about this in a second.

Generally speaking, when a power outage occurs, the UPS activates it’s the auxiliary power supply for about 30 minutes (depending on the total consumption of the electronic gear plugged into it) preventing any device connected to it to die instantly.

Minimum recommended time would be 1 hour but 30 minutes is also excellent.

I bought a UPS because I had some power spikes some time ago and I was scared it might blow up my PC rig. 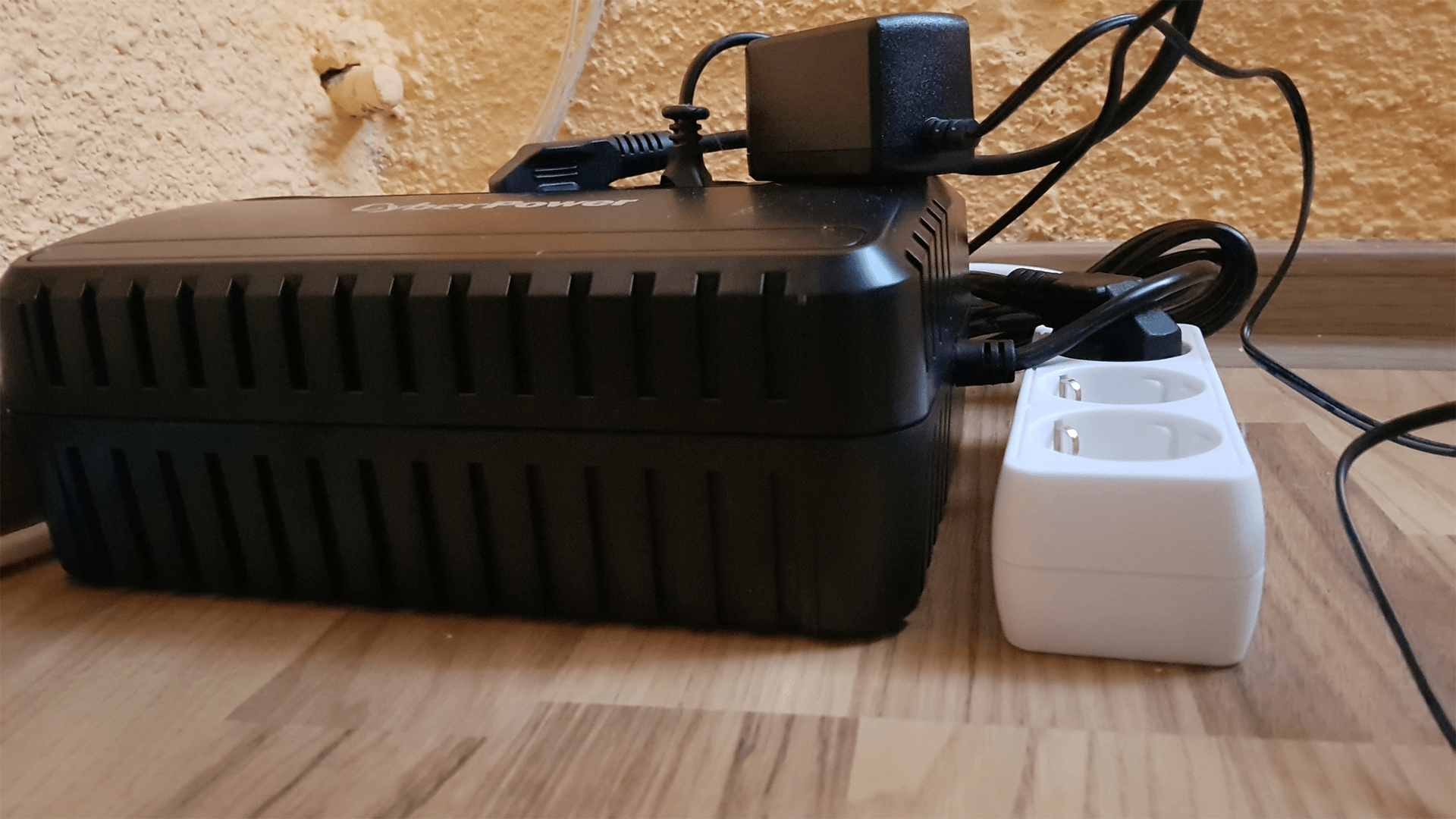 Went to a local shop and bought CyberPower BU Series UPS which was cheap actually, around $40. 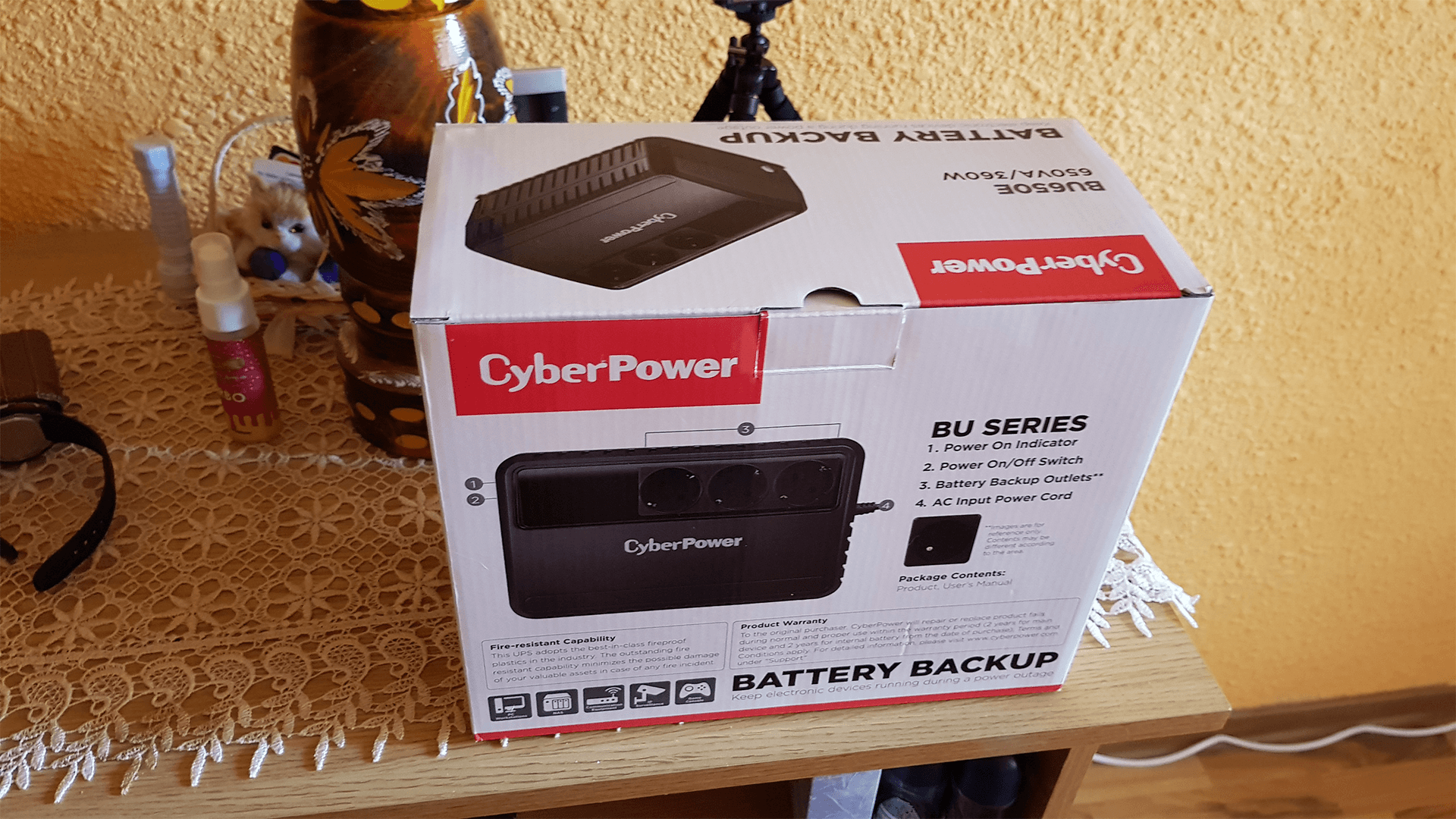 Tested it and so far so good. Be prepared to hear some constant high pitch noise, though.

The design looks interesting, close to what I am usually installing, namely Renton 650 UPS.

As far as the manual says, a fully charged battery for this UPS will provide 30min online time (after the main power is cut off) for a 21″ iMac Computer that has around 60Watts consumption.

For a PC (surely mine will take more) with 90Watts consumption, it will give around 18min online time.

I get some exciting features as well, such as:

AVR (automatic voltage regulator) sometimes is included with UPS, allowing it to take on with pride any power spikes that could fry electronics. Yes, I had cases when the power spike was so significant, it burned even the UPS. I think it went to around 350V before it fried it to hell.

To emphasise, Surveillance systems use HDD that have up to 5400 RPM while the PC HDD’s have over 7000 RPM. Using PC Hardware can mess your data. It depends what size you want to acquire through.

If it’s okay with you to use motion detection for cameras (using the individual camera sensors), then 1 TB is probably enough to store data from 4 cameras up to a week.

Usually, I up that to 4 TB if it’s a higher number of cameras or the client wants more storage over time.

Here is what we used so far in our projects:

Two of the main tools that I used daily were the DEWALT Impact Driver and the Makita Lithium Cordless Rotary Hammer.

These are durable tools that can last even a decade if you take care of them properly.

The DEWALT Impact Driver is good because it’s forcing the screw to go further than it can, to it’s maximum, so it can’t come out that easy.

Its inseparable partner is Makita Rotary Hammer. Using these two together is amazing in the security field.

Stuff you can use the DEWALT Impact Driver for:

First of all, you probably wonder, why were PC rigs added to the resources page?

Anything we write here is not to brag that our systems are more fabulous than someone else’s. It is just the happiness that our rigs can run radio simulations, writing articles fast, multi-tasking software, testing demanding software.

It is one heck of a system and works like a beast in Blender3D, Photo manipulation (Photoshop), Gaming, Multiple tasks. I never run out of memory, and to be honest, I don’t need more than this for now.

More about my system

My system can run:

I did a benchmark using Unigine Valley, and I got these results. 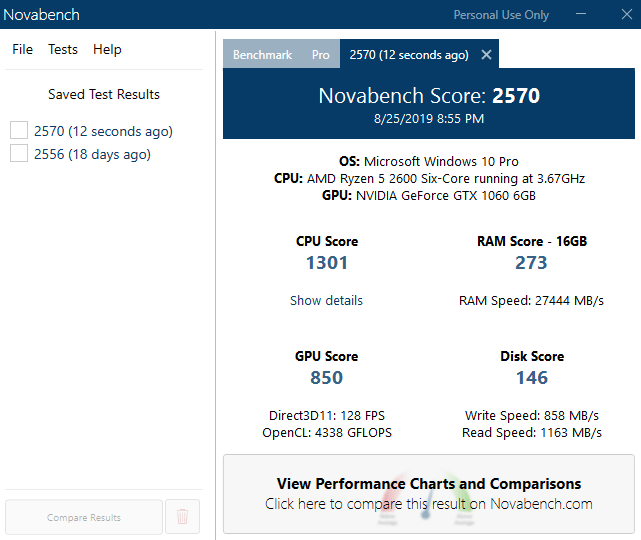 Need around 1 second to open any of the applications. Photoshop is also loading faster.

Another reason I like this rig is that it runs Blender 2.8 release like a pro. It can display around 2.000.000 polygon scenes with no sweat.

However, the temperature of the GPU goes up when rendering those 2.000.000 polygons consistently.

A most powerful feature of this rig, and probably 50% the reason why I built it in the first place was the ability to stream online with decent FPS and even run game streams which I am going to do at some point!

After testing this rig continuously for video editing; indeed, I say it is excellent for that task.

I have to say my only bottleneck to this system might be the internet package from my ISP. I got the lowest package of 100 Mbps until now. I am updating in September to 300 Mbps and take it for a test.

The G.SKILL memory has proven out to be pretty good so far. I activated XMP Profile in the Bios to be able to taste that sweet 3000 Mhz Speed.

The interior design of my rig is reasonably lovely, compared to what I had before.

The backside of the PC looks fancy as well. Tasty! 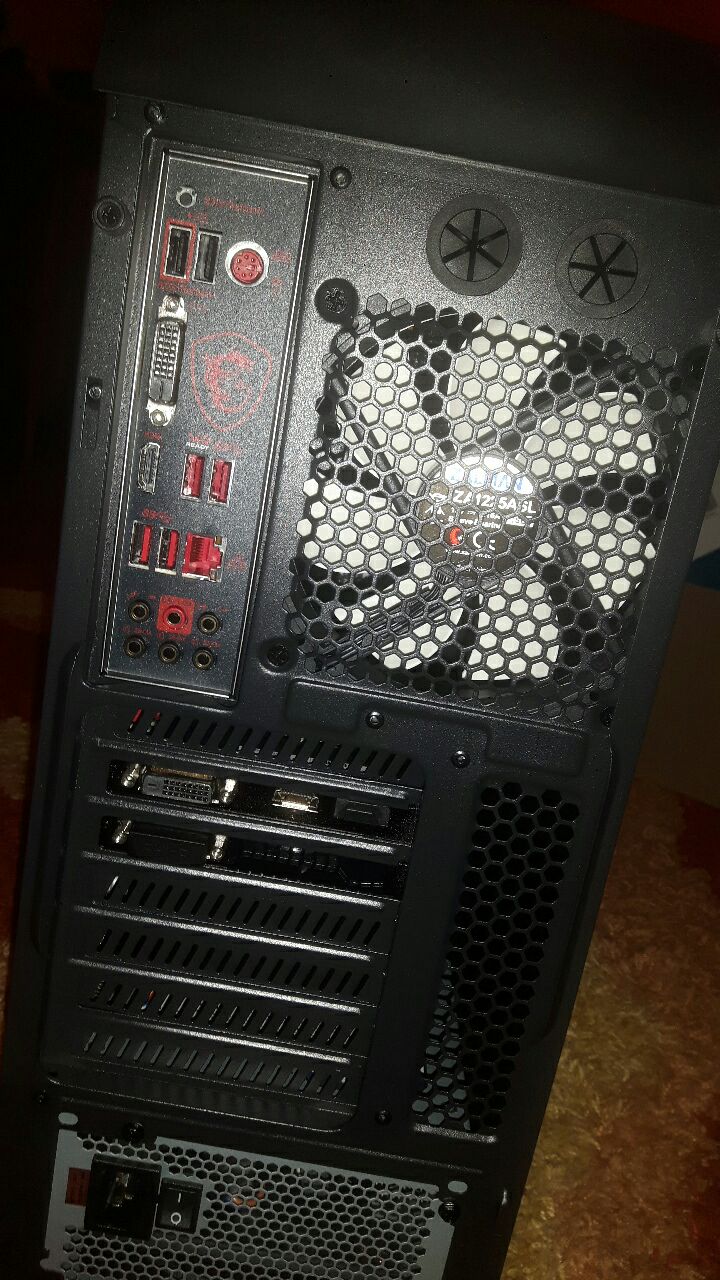 How does my desk look with final additions? 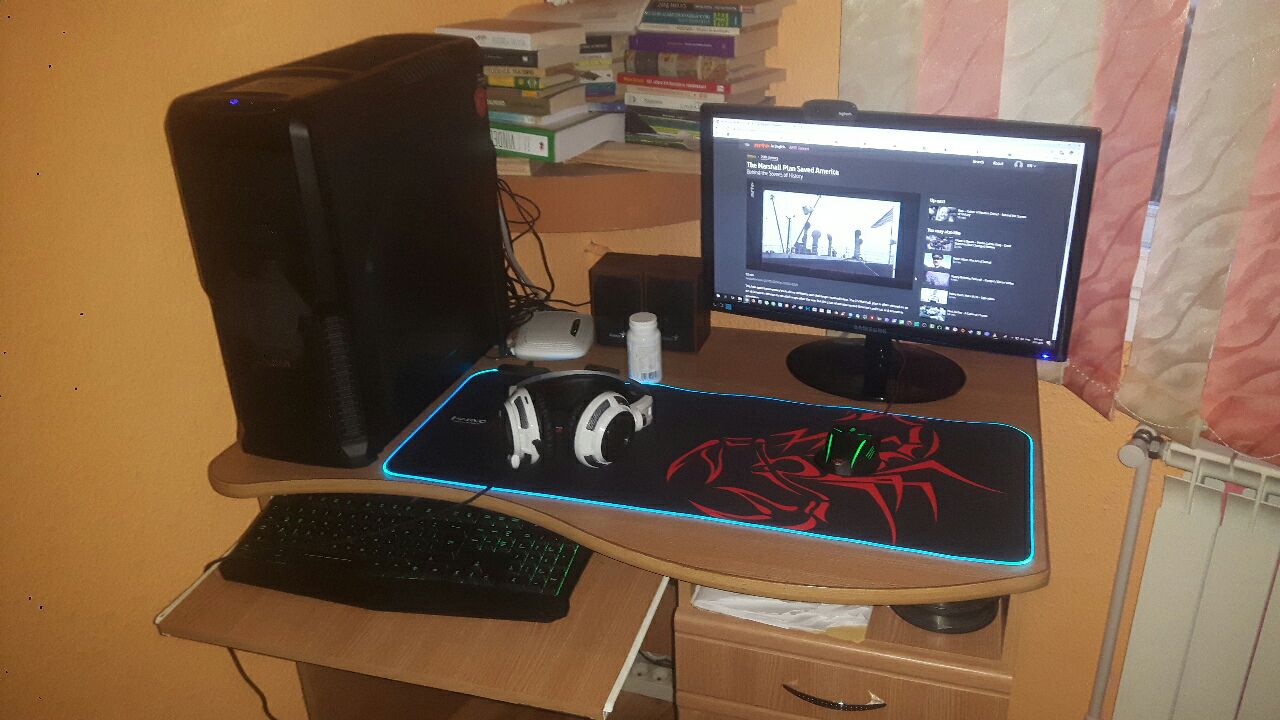 I used to own probably a second-generation i5 around 3500k or something like that.

I have upgraded it in December 2016 by replacing Nvidia GT 440 1GB DDR3 with Nvidia GTX 750TI 2GB GDDR5 with 8GB DDR3. It has been an excellent warrior, though, staying with me for like eight years.

I took the decision to give it to my dad. He will use it to learn a lot about computers.

Finally, the boys from ISP came to install the fiber link in my apartment. Up until now, I had a 100 Mbps package from my ISP which was decent enough for gaming, uploading about just anything, writing my articles.

The only issue was the contract expired eight years ago. I did pay for my ISP services (internet, TV, phone), and they kept me in their service as well, but the time came when I had to visit them at the big office.

Took some free Saturday (last week’s) to go with my dad (their real client) to visit them.

Guess what? We got a pretty good deal! They created another contract for us, told them not to include the phone service anymore. That would be $1 off every month (which we paid for eight years).

Then the boys came to install the FiberHome Router and fiber link into my room.  My speed increased from 100 Mbps to 300 Mbps for only $0.50 a month. Furthermore, they gave 50% off for the first four months.

What makes a man happy if not a good ISP and good internet speed? I suppose now that my rig is finally complete with this final addition.

You know what? I decided to buy a microphone for my future reviews and game streams.

After a long search, I found GXT 248 Luno produced by the company called Trust to be what I need.

I have a gaming mouse from Trust, and it has been working well for almost a year and a half.

I kind of “trust” this company that it would provide me with some more quality goodies. 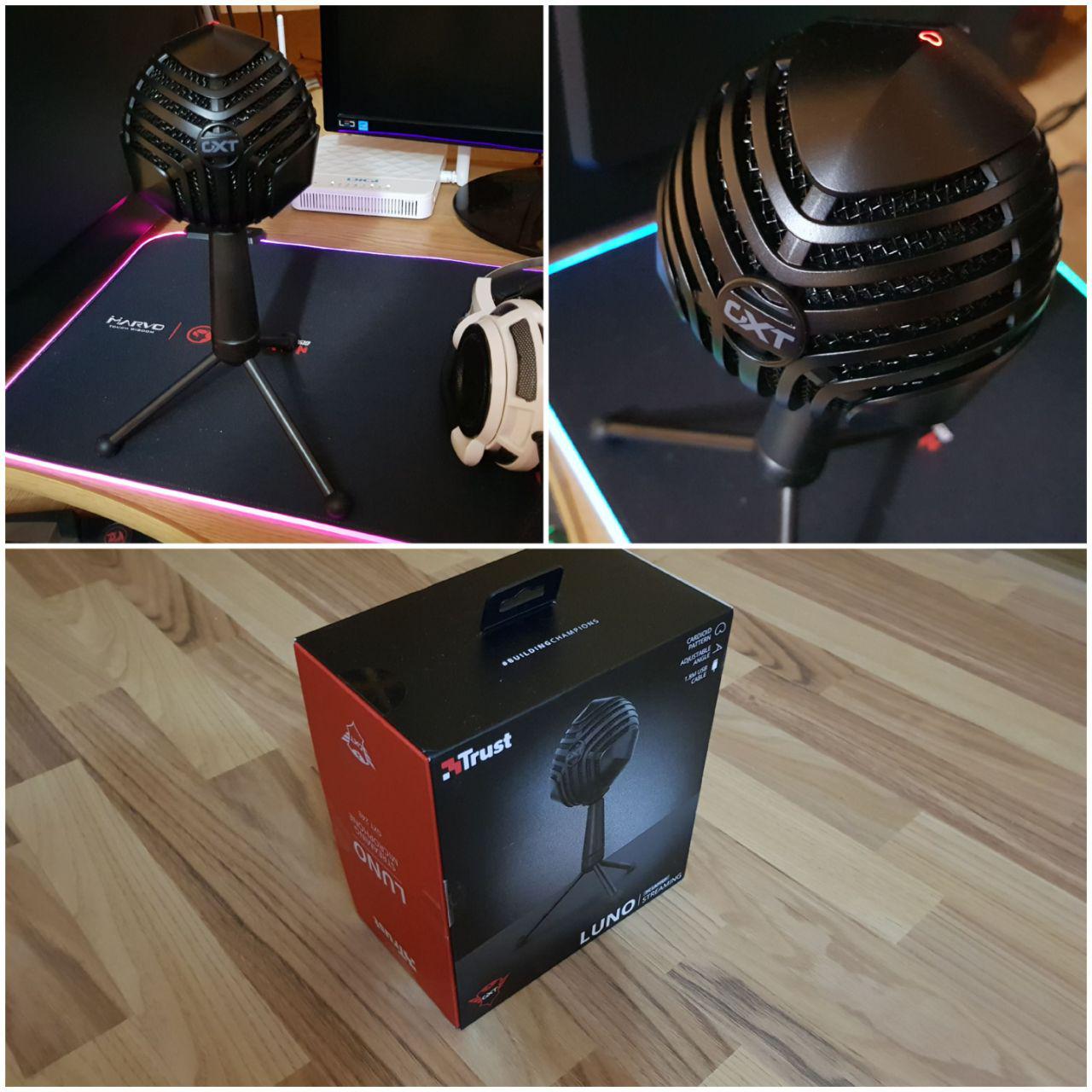 I had the chance to test this microphone, and I started asking people everywhere.

Had a call with my brother, he said it’s perfect.

Then I called the other administrator of this blog; he said it’s perfect.

I hopped into VRCHAT, and people said it’s okay.

Tested it over Streamlabs Obs and I could add some helpful filters like Noise gate, Noise suppression, Gain.

I can’t wait to use it for game streaming and Nuclearrambo reviews though. It’s a fantastic piece of equipment, and it is an excellent addition to my desk as well.

Final thoughts for my rig

Look, most of the people nowadays use smartphones to do daily tasks.

Doesn’t surprise me at all, since technology has advanced so much.

The performance of these devices could compare to Desktop PC’s. However, and thankfully, Desktop PC technology is not left behind.

We are lucky to get better and faster PCs by the day. The only downside is our systems get outdated fast, so we need to replace parts from time to time.

If you want to build a similar rig, here are my parts. Nothing makes me happier than to share them with you!