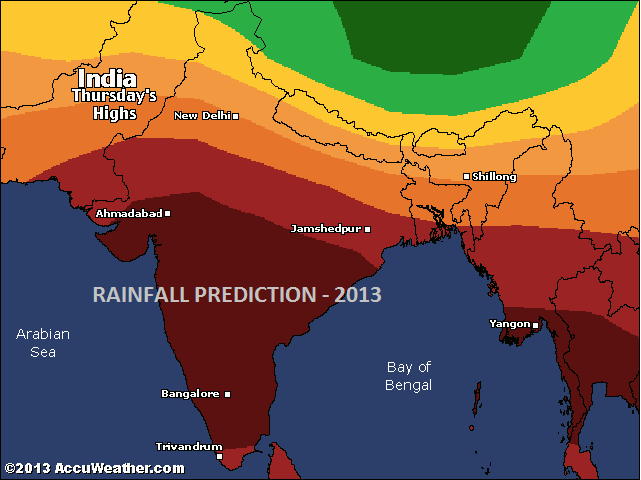 Last year we saw the effect of El Nino creating cold weather conditions for India, on the other hand it also caused very less rainfall in India. Due to the severely low rainfall, drought like conditions can be seen across the country side. Due to drought, the pressure on ground water reserves has drastically increased and which is causing them to be depleted at an alarming rate.

In order to predict what is yet to come this year, we must first study how rainfall occurs in India.

The mechanics of monsoon

By the month of April, temperatures and humidity are still high. However, due to the cooling effect of sea breeze, the temperatures ‘feel’ like they are low.

However, last year in 2012, the process got delayed and the winter winds continued to blow till end of march. We will later study, how this affected the rainfall last year.

As the summer proceeds, the land heats up. The heat penetrates the ground to some degree. Because of the penetrated heat in the ground, the daily lows remain pretty high at 29 to 33 degrees C. This is the reason for generation of low pressure in the atmosphere above the Indian subcontinent. 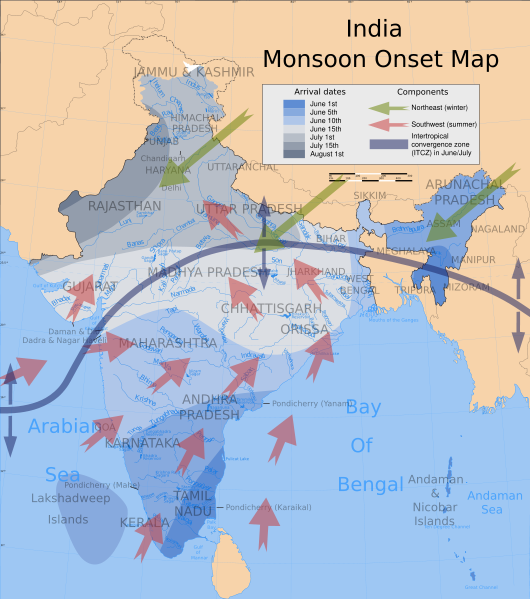 Now, the mechanics of this are completely driven by how low the pressure gets due to heated land.

El Nino caused the winter to last much longer than average. The temperatures remained cool until the end of march. The onset of dry hot winds from Gujrat was delayed by almost 2-3 weeks. The whole process of land heating up and creating enough low pressure was also delayed.

Although the monsoon of 2012 was considered to have arrived on time, the rainfall it brought with it was much less than average. This is because the low pressure generated was not sufficient enough to pull in moisture from the air over the seas.

By far, it looks normal and means that the monsoon could be normal.

Although another Japanese weather model suggests that there could be a severe shortage of rainfall this year.

Looking at the current temperatures of Indonesian region, it can be observed that the temperatures in that region are high enough. Also the moisture levels are apparently high.

In case, the temperatures over Indian subcontinent rise during a course of next 2 months, we can expect a good rainfall.

It is better to be alerted before hand that, Global warming related changes can be abrupt and break any predictions that have been made.

Temperatures have begun to rise on the interior parts of India making the drought situation even worse. Levels of all the water providing lakes are dropping fast. There is an estimated drop of 2 feet every week, which will rise even more as we proceed into even hotter month of May.

I will keep this post updated as we proceed into summer. Meanwhile you can read the previous related post: The reason for less rainfall in India. The years 2008, 2010, 2011 received normal rainfall which the rainfall for year 2009 and 2012 and even 2007 follow a similar pattern with very less rainfall. The gradual trend shows decreasing rainfall, while the sudden spike at year 2011 shows a surge of rainfall above normal.

After observing this data we can now say that the year 2013 can receive a higher rainfall than previous year. If the weather follows the pattern of 2008 – 2011, we could say that the year 2014 would get a very high amount of rainfall in the month of July. But again, that is too far to predict of.