Facebook is busy testing a new timeline which will replace the current one. Current timeline displays all the recent posts and activity on the left side while activity modules are placed on the right side.

With the new facebook timeline update the line down the center will be removed and replaced with a single column of posts. In that way your posts and activity will get more space. The smaller activity modules such as photographs, or your liked pages will get a narrower space on the right. Check out the image below: 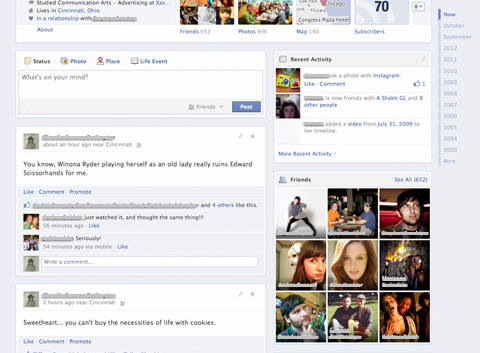 The new design of the timeline still has those months and years placed at the right hand side instead of the center.

The center line which went all the way to the bottom of the timeline was annoying for a lot of users. It feels like Mark Zuckerberg is trying to get the best from the past.

It is clear that in this test version the posts have become wider and all the open graph apps and activities have gone to the right.

When there are no apps or photographs to show on the right hand side, it just becomes blank. The posts on the left do not occupy this blank space as you scroll down.

Another thing that was noticed is, the highlighted posts appear the same size as regular posts on your timeline. Comparing this to the original timeline, the posts actually got bigger in size as soon as you highlighted them.

The new facebook timeline update is just a test and we can expect more to come before it even gets released publicly for all the users. Facebook confirmed that it is testing this design with a small percentage of users but did not offer any additional information. The release date for the new timeline is unknown. Be sure to check this page later, we might have some more information for you. So, if you are one of those few users please let us know.