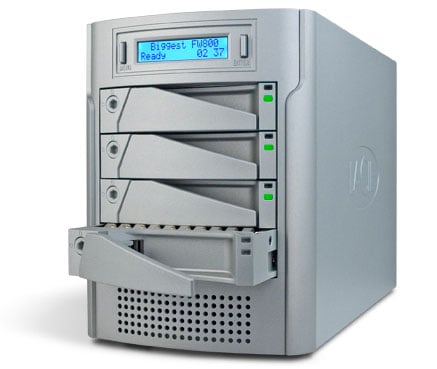 Both are two different methods of managing disks and improving the capacity and performance of hard disk drives.

A RAID can be described to be a hardware RAID when it gets implemented on hardware. This can be done on a motherboard or on another RAID card. The Windows takes the entire RAID to be one single disk. RAID controller controls the individual components of the disk and cannot be accessed directly by the Windows. RAID levels are generally implemented on the hardware based solutions. There are currently 7 major RAID levels, RAID 0, RAID 1, RAID 2, RAID 3, RAID 4, RAID 5 and RAID 6. The RAID which is hardware based provides disk drive protection against loss of data in media failure and it also improves performance of write/read operations. This dramatically increases the data transfer rates of the storage media. The performance with the hardware RAID depends on the configuration of the RAID. Hardware RAID gives an advantage of replacing the hard drive without shutting down the computer.  The main disadvantage of hardware RAID is that it is more expensive and you may be confined to a single vendor. Hardware RAID has more fault tolerance compared to software RAID.

Software RAID is also known as operating system based RAID. The software RAID may be done by the software that may be the part of the operating system or may be a part of the firmware and driver that comes with the motherboard. It implements the various levels in the block device code or kernel disk. It is the cheapest solution as compared to an expensive hot-swap chassis and disk controller cards.  Software RAID can also work with SCSI disks as well as IDE disks, which are very cheap. With the advancement of technology software can give better performance over hardware RAID. Software RAID is normally used in entry level servers and it requires only a standard controller.