Every day it’s getting harder and harder to be motivated on a consistent basis. For this reason, a lack of motivation leads to a lack of happiness and success in our lives.

Reasons for this happening are lack of self-fulfillment, lack of financial independence, inter-personal relationships difficulties, depression.

This article is meant to show readers some easy steps to become successful and motivated. However, it matters how an action is taken in order to actually be motivated and, by default, successful.

The story of a struggle to become motivated

Being born in Romania, to struggle was the norm. After Ceausescu regime fell, everyone wanted to take control of power.  People became poorer than they were during Ceausescu regime. Consequently, wages here became terrible, barely reaching 5k $ a year, which continue to this day.

Throughout school, I struggled with bullies. Generally speaking, there was not a single thing to like, except one or two classmates which made the day feel easier.

Having to realize after 27 years that school was just a waste in my case really breaks the very self.

Despite all bullying, having poor parents with low wages, I continued struggling. Finished high school, went to college. My parents received countless reports from the teachers that I did not focus, always day-dream,  suggesting that I’ll never be successful in life.

Overall my grades were average, passed things only to grow up faster. Classes were boring, no interesting subject except geography, IT stuff, sports that could fuel any short-term happiness at least.

Fast-forwarding in time. Finished university with slightly above average score. There have been two years break between the end of the college term and when started studying for university. That’s when things started breaking down.

I started working in 2015 for a company that installs surveillance cameras and security alarm systems. All was fine until 2017 mid-spring, having worked more than 16 hours a day on average, my body finally broke down. This intensity continued until the end of the year. 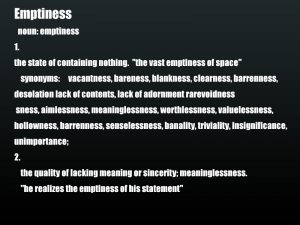 Mid-spring 2017. All of the sudden I feel empty. Having seen my neighbor (best ex-friend actually) succeed financially, whilst I still continued to struggle made life seem like a piece of shit. In the same time, feelings of anger, self-pity, not being worthy overshadowed the normal average sad person I was before.

It was the year 2017 winter. After bottling up all the negative emotions until then, reality finally got ripped apart. Delusions, hallucinations, started to appear as if they felt the darkness surrounding my soul.

Furthermore, heart started having palpitations as if, the emptiness inside caused it to panic. Consequently, the body tried to release that pain through crying, but when it was not doing that, it was just emptiness.

It was Christmas of 2017. Everyone was excited about having to sing carols again. This time of the year is usually when families bond together, friends bond together, spend time together.  I broke down even more into feeling totally empty. For 5 years of wearing the fake happy mask, it finally disappeared. This is when I realized something was wrong but still continued despite saying it. Out of despair, my only choice was to try to survive through this. It was actually the first year in my life when I felt completely empty, void.

New Year’s Eve 2017. My dad and I went outside to fire up some fireworks. Was one of the

best moment in the whole month. I got to talk to him a bit about my personal issues, but still emotionally wrecked.

This has continued until March when I finally took the ultimate decision. I will go to a psychologist. One simply cannot take that any longer without committing suicide.

After having scheduled the first therapy session, I met her. A woman, clearly self-independent, mature, open-minded started asking questions. Answered them promptly, however, they were slightly mixed up in a messy way.

She prescribed medicine “TONOTIL”, “RELAXIREM FORTE”, “5HTP” which I took for several months, 5HTP being the most taken until the present day (or rather until last week) and continued going to therapy.

I don’t know how or why, but it has worked. With a lot of willpower, I started reading books about self-development, started committing myself to train, made up my mind to make money online (which was still a struggle by the way) overall feeling better than I ever was in my entire life.

Life is still hard but, having faced depression almost to the point of committing suicide, I realized death is the ultimate winner. Can’t struggle to fight against that beast. It always wins!

Steps  needed to be motivated and ultimately get success

Optional: Do not get married! Period.  Marriage will just suck all your money from all sources. If you decide to have a child, it’s even worse, the expenses are much higher.

If you do decide to get married, there is a chance your wife will throw a divorce to your face. Then she can take 50% of assets and even the kids.

Nowadays more men are realizing a change in women attitude. To find more of this read “MGTOW”.

Consistency is the key in everything. Whenever we fail, the best thing to do is suck it up, get up and try again. Listen to me, try again!