Let’s fight depression together for we are the same 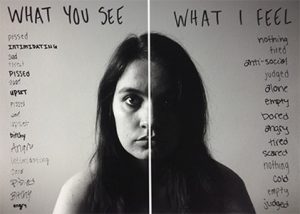 To Fight depression for a short time is the most difficult thing to do. To fight it more than four years is impossible. I am making this post to say that i figured out i got chronic depression or in medical terms “persistent depressive disorder”.

For over four years, i have fought depression and still fighting it. Some days i feel like there is no end to my misery. Trying to tell others is also not an option, as they will say you have nothing, that you are perfectly fine. But you are not.. You know too well that you are not.

Depression affects our daily lives, sometimes unconsciously, through our actions, behaviours,  thoughts. Trouble concentrating at work, boss getting impatient with your reckless actions, stressful events; all contribute to developing this disease that is so apparent.

Depression can lead to a more serious action – suicide. A statistic report estimates that almost 1 000 000 people kill themselves every year by commiting suicide. 90% of those 1 000 000 are because of depression and substance abuse. It is also estimated that by 2020, the rate of suicide will increase by 2x.

To not confuse depression with anxiety. Anxiety is , by definition, a Mental Illness (as WebMd described in one of their articles) , that acts like a response to stressful event(s)  in our lives. It is the primordial instinct of Flee or Fight. It is one of the main illnesses that has a direct connection with depression. Anxiety leads to depression if not treated!

I have read a lot of blogs that would tell me only the symptoms and never what i needed the most – a cure. A cure for my persistent depressive state that has taken over my mind , body and soul.

The people that got depression know what i am talking about. As for the rest of my readers, please, take all measures necessary to prevent depression.

In my personal opinion, the possible triggers to depression can list as following:

HOW DID I TRY TO FIGHT DEPRESSION

For more than four years, i had depression. Every morning i would wake up in fear of getting out of bed, of preparing my morning breakfast, of going out to job.

Sometimes, my mind and subconscious would activate their defense mechanisms to fight depression in their own way.  Depression won always.

From 2013 onwards, i had a series of events such as going to university, going to work everyday, being lonely all the time , not finding a girlfriend,  having financial problems.

My childhood wasn’t a good one in my opinion. I was born an introvert as i described in “How i increased my self confidence in 3 months”.

I had a combination of Persistent Depression combined with Bipolar Depression.

For four years, i had lost my interest in almost any activity, i started putting on a fake mask hiding my real smile that has died.

During these four years of hell, society has put me through too many tests to handle with a sane mind.

I have tried many methods of relaxation, physical and mental exercises, sports that can boost your confidence such as Kendo or Archery. They have not failed me, althought depression did it’s best to keep me far from these as well. Nothing is more frustrating than wanting to do something and depression comes to make it feel as though it’s not needed.

I still fight with depression even to this day, i changed jobs, feeling more miserable now.

Yet, even with my mental disorder, i still haven’t blamed anyone (but myself – typical) . Not God, not Universe, not my friends (or past friends) not my family.  I had thoughts of suicide but they went away fast (thank God).

-I can’t promise anything with this post because i am fighting depression myself for over four years and have yet to figure out how to completely make it disappear.

-This is a call for action for those that have depression and don’t know what to do.

-The things we can do so we can continue to fight depression are:

What is your thought on this subject? What are the best solutions you have come up with when psychiatrist / psychologist , medicinal treatment and all the rest did not work?