Rather weird things get captured from the high altitudes while the satellites survey and photograph every piece of land on the earth. These satellite images land up on Google Maps for everyone of us to see. 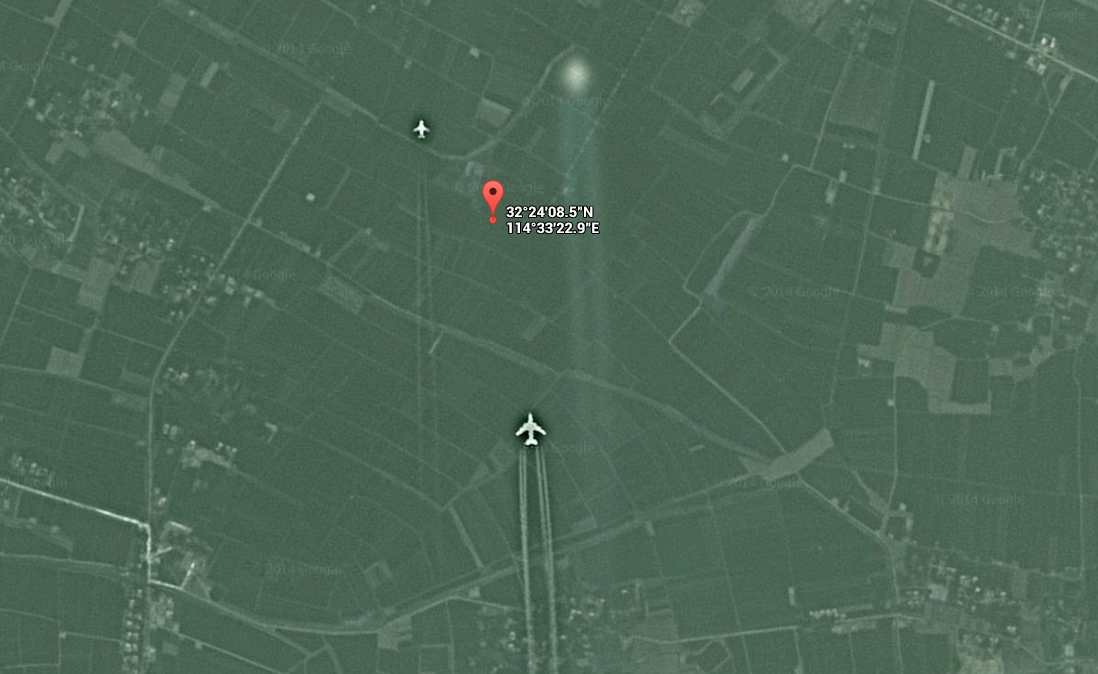 A very rare satellite image taken over Xinyang and Zhengyang (China) shows a fuzzy white mass ejecting some sort of gas trail which is very similar to those ejected jets. The interesting thing about this image is, there are two aeroplanes, one which apparently is above the UFO and one which seems to be below the UFO. All three flying objects seem to go in exactly same direction. Could is be possible that the two jets are following this UFO or is it that the UFO is nothing but a military experiment which is being escorted to a new location?

It is just mind boggling to see a fuzzy cloud like object emitting smoke trails along its path. The UFO has no specific shape which we can determine nor does it have any aeroplane like features to notice.

Some may say that it could be a cloud, but do clouds emit smoke trails? Even if we consider it to be a cloud formation, the surrounding aeroplanes and the smoke trail from the UFO seem to go in exactly same direction, thus giving in some support to our thought that it is some artificial object and not a cloud formation!

You can take a look at the UFO found on Google Earth by going to these coordinates which will land you up somewhere in China.

We cannot just think of it from one direction. The fuzzy object could also be some sort of military experiment by China. Or could it be some advanced evasion techniques allowing the jets to be seen as obscure objects when being photographed? It could be anything, and it would be rather idiotic to expect that the Chinese government would tell us what it really is.

We also found a dead body on Google maps few months ago.