The reason for delayed monsoon

Usual trend is that monsoon sets in Kerala by first June every year. After that the moisture containing clouds begin moving upwards covering the entire Indian subcontinent. The onset of monsoon is due to the fact that land heats up causing low pressure region over the entire Indian subcontinent. This low pressure over land pulls in the moisture from the sea, especially from the South and Southwest region. The mechanics of monsoon are bit different on the eastern coast. We are only going to talk with respect to the western coast of India.

Let us first look how monsoon works before we look into the reason for delayed monsoon in India. Maximum heat is received by the southern region during summer which causes enormous amounts of water vapor to form and resulting in cloud formations. If there was not much low pressure on land, this moisture in the air would keep on rising and fall down as rain over the sea before reaching land. Everything was set in motion this year, except the part that a cyclone was born as a result in the Arabian sea. Because of extreme heating in the sea, large amount of sea water begins to evaporate. This being lighter than air rises very fast and goes to great heights and form clouds. Due to the Coriolis effect, the vast amount of clouds begin to spin and form into a cyclone. This phenomena also occurs when very warm water is present in a given region. The warm water current may develop due to the sun’s heat or may come from the equatorial region. In our case, both could be the cause. As the cyclone begins sucking more and more water vapor from sea, it begins growing and at the same time accumulates a lot of energy.

Although, some cyclones may fade away before reaching the land, some just continue growing until their power diminishes after touching land. By that time it would have caused a lot of damage.  There are several deciding factors for that. One of them being the “hot towers”. They are columns of warm air having high moisture content and they usually position themselves around the eye. There could be more than two hot towers present in a cyclone. These are what powers the hurricane. The more powerful a hot towers are, higher energy the cyclone would have. Cyclone Nanauk formed in the Arabian sea during 5 or 6th June and ever since then it has been moving northward. Satellite imagery shows the path it has taken so far and those images explain to us the absence of monsoon. Clouds had begun to form and move over the land as they usually do. It even rained a little on 9th June, and since the night of 9th June there has been constant gush of wind with growing intensity. Cyclone Nanauk moved from the south to the north and has been drawing air from surrounding region which apparently includes land. All the clouds that had gathered in the past few days were immediately sucked by the cyclone and strong gushes of wind began flowing. An stack of satellite images from past couple of days should be helpful in showing progress and movement of cyclone Nanauk.

As of now, the cyclone appears to be just besides Mumbai, and if you look towards the south we can see hope for monsoon. 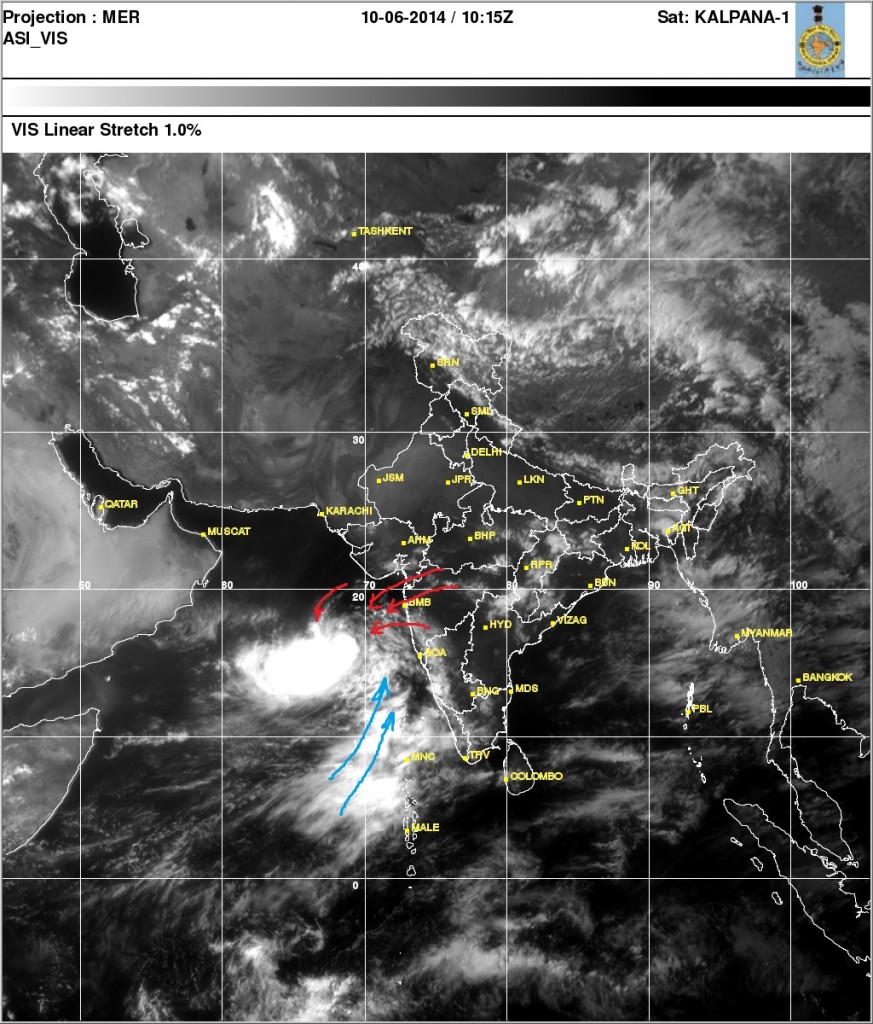 As the cyclone moves upwards, the wind speeds will decrease and southern and south western winds will restore the movement of monsoon over the Indian subcontinent. From the satellite image, we can see how the cyclone weather system has entirely blocked the monsoon clouds (indicated by the blue arrows). It also shows a dark region which aligns itself with the arms of the cyclone and it goes right across the land. I am no meteorologist, but the images clearly show that there would not be any monsoon movement for at least a day or two in Mumbai and neighboring areas. Meteorologist have also predicted lack of proper rainfall this year across entire Indian subcontinent due the the El Nino effect. If you wish to know how El Nino affects India, do head over to my past article about it.

If you are too lazy to read, you can watch this wonderful documentary about global weather systems.