Venus Transit 2012 – How to view the venus transit

On 6th June 2012, indians will wake up with a Venus transit in progress. The last venus transit had occurred on June 8, 2012. The whole event of venus transit of 2004 was visible from Indian sub continent. This time, it will be visible for few hours after sunrise. Assuming the predictions to be correct, monsoon will be arriving by June 10, although it is very likely that there will be clouds passing by across the horizon which could block the sun’s clear view.

NASA has laid out a complete map of visibility for whole world. 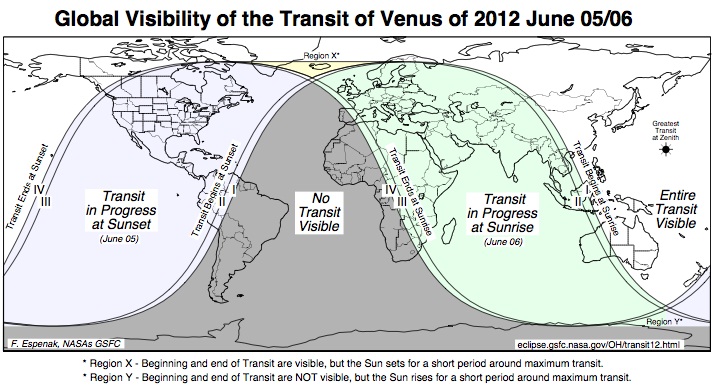 The Venus transit is a once in a lifetime event which is going to happen this June 6, 2012. It will occur again after more than a century, probably when we would not be here to watch it.

NASA has calculated the future Venus transit events to occur in December 2117 and December 2125.

How to watch it?

You can either go to a local astronomy club and watch it with telescope equipped with filters or you can use a pin hole camera to view it.

If you own a small binocular /telescope , you could project the image of the sun on a piece of paper and view it.

Project sun on paper with telescope

You can use the above setup for observing the Venus transit this June.

A high magnification telescope will provide better details of the sun and the Venus passing across it. In fact, it will give you a bigger picture of the sun.

If you own a high magnification telescope it would naturally be better to view the sun through it by using a solar filter.

If you do not own a solar filter you can buy it from here for low cost.

You can view the complete details and history of previous Venus transits on the official NASA page.