The most simplest circuit which can convert low voltage to high voltage is the Boost converter circuit with high efficiency.

The simple low voltage to High voltage converter requires an inductor, diode, a high speed switching device and a storage element. All this can be achieved with a simple setup shown right below. 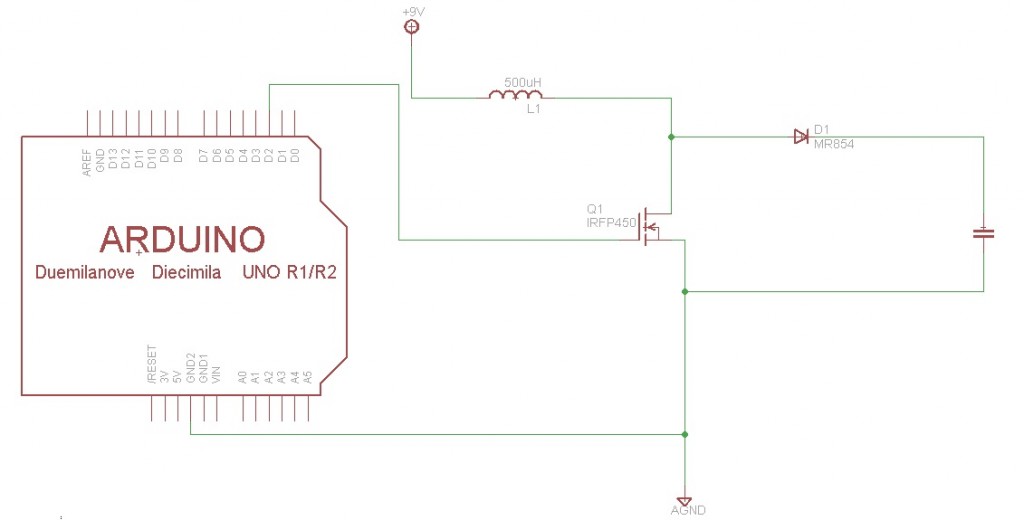 The arduino generates PWM waveform which is used to drive the MOSFET. The duty cycle of the PWM plays an important role in defining the amount of voltage you will be getting at the output.

1. When PWM is turned off

2. When PWM is turned on

During the OFF time of the cycle, MOSFET turns off and no conduction can take place. Due to the property of inductor it blocks any change in current. Because of this, the energy stored in its magnetic field is released. This creates high current. But since the MOSFET is turned off, the large current flows through the diode and charges the capacitor.

When the whole process is done fast enough, we are able to achieve a large voltage at the output.

In this experiment, I have used an old inductor from switch mode power supply that I found in the computer’s monitor. So I don’t know the value, but it is definitely greater than 200uH. IRFP450 MOSFET (HEXFET as they call it) can carry 14 amperes of current, and has a very very low drain to source resistance. The reason for using such a large MOSFET is, it does’t heat up. If you use a MOSFET with large drain to source resistance, you are going to get a lot of heat, this increases the possibility of destroying the transistor (I already destroyed like 4 expensive MOSFETs)

MOSFETs are very sensitive to heat and over voltage, so please take care that you do no exceed the specifications. My advice would be to obtain MOSFETs from old power supplies. You can also get a good number of high voltage fast response diodes from those old circuits.

I suggest you to build this circuit and try out different values of inductor and PWM. Here is a small arduino code used for generating PWM with On time of 50 uS and OFF time of 15 uS.

When this PWM configuration is used with my circuit it can yeild upto 394 V. I did not go beyond that, because the capacitors I have used are limited to 400V and so is the diode. So it is better to be safe below the range.

//Program for generating PWM for the boost converter

Instead of using arduino, you can also use timer IC or specialised PWM driver ICs.

Here are some of my circuit setup pictures.

I have created a simple circuit involving Timer 555. The PCB layout and the schematic are below: 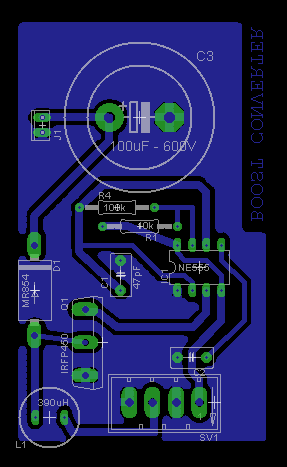