Is there Life after Death? 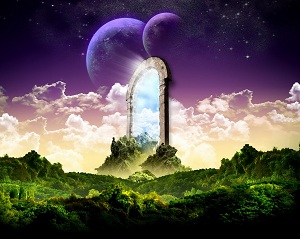 Since we were kids, we asked this question over and over again: Is there life after death? Yet many of us have forgotten mainly because the society influenced us in some critical way that we didn’t even have time to think about us anymore. I am here to explain my opinion about Life after Death, and what are the possibilities of it including a Science-fictional world and spiritual development.

There are two main “worlds” that coexist in the same time with our own world; this dimension, universe, earth. They are called Astral World and Spirit World.

Astral world = a dimensional plane strategically added between our world and Spirit World. It is mainly filled with souls that rather passed on, or have made the choice of staying there.

There are probably four stages of continuation right after we pass on “to the next world” . These are:

1. We leave our physical body lifeless (since our soul has separated from our physical bodies; the reason is – lack of life sustainability; no oxigen, heart stopped beating, failure of an organ, cancer etc)

2. Right after we leave our body, the Astral Soul (we call it this way because it is in the early stages) floats out. During this process, we can see everything, everywhere, our Minds are very very strong and with any command like teleporting the Soul can travel along with the Mind. The main controller is the Mind, but it would be nothing without a Soul. (a note here: The Mind is not the same as the physical Brain – The Mind is actually our subconscious; Our universal consciousness – )

3. Then there are two important choices we would have to make. Stay into the Astral world  (to solve matters, or to remain forever) or walk into the tunnel of light (many people that have experienced NDE -near death experience-  have probably seen this tunnel of light) and advance to the higher world – Spirit World.

If you want to find more about Astral World, i can give you a hint – Ghosts.

Spirit world = a dimensional plane higher than the Astral World, above all worlds. It has a systemic ladder of 7 Realms, the 7th being the highest and the 1st being the lowest.

After the soul decides to let go of Astral World and pass into the tunnel of light, they arrive into the Spirit world.

One first thing that happens there is that the soul goes to the specific realm (1-7) based on his karma gathered in his last life, the 1st – 3rd realms being the lowest, the 4th – 5th being the medium ones, 6th – 7th being the highest.

So, in other words you can imagine what souls on 1st – 3rd realms feel like when you have gathered serious bad karma in the last reincarnation. Those realms are filled with souls that murdered, raped, took their own life. Souls on 3rd realm can be visited sometimes by souls on higher realms if they request for help and guidance.

In spirit world, all souls can project almost anything up to whole worlds just with their minds. I have read in the book “LAWS OF THE SPIRIT WORLD” that our universe along with our planet were created by a soul (GOD).

This might sound like Science Fiction but it’s not. It’s actually pretty real considering the proof gathered over few dozens of years including ghosts, strange phenomenons, NDE pacients that returned to life and 90% of them said they saw a bright tunnel.

The world we live in tried to switch off our instincts about life and death since birth. The time will come when we will see the  Unknown worlds (but proved) and feel all the mistakes we did (or good deeds) which shall decide either if we are bad people or good people. Take it as the “Judgment Day” from the Bible. The difference is that the Bible was rewritten so many times it lost it’s consistency over the years, but probably the main writter was a soul from the spirit world trying to guide us.

This is a matter of faith. If you do not require too much proof and just believe, everything will seem clear sooner or later. There should not be any duality conceptions ever, or else you would never discover what the real God can offer us.

Life after Death is a pretty serious topic and i really felt the need to tell you that the world we live in is not an illusion, it is not real either, it is not the only one, but it’s merely a school that sooner or later must be graduated.

How can i prove more than this? I can’t, that’s all i can say. I have been researching for like 3 years now if there is life after death, i have tried many stuff including meditation, other sources, documentaries, my own theories and they ended up being true after all. Now it’s up to you to believe whether you disappear for good or return to our real world: The Spirit World!

As we proceed, I will be writing more into the depths having Science on one side to support all my explanations. Consider this as just a summary of what is yet to come!